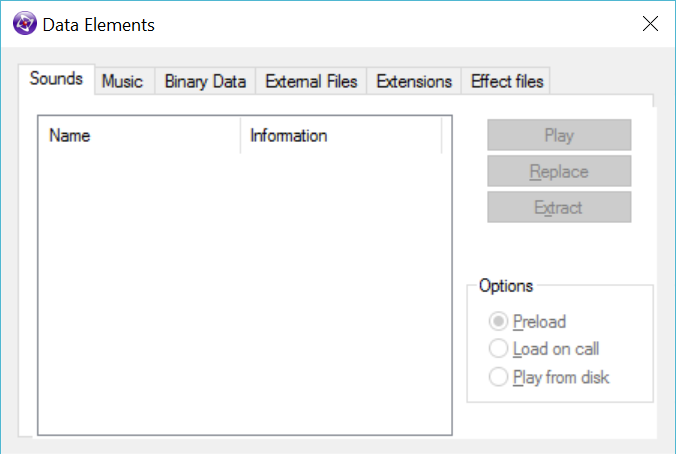 The data elements dialog with no embedded sounds.

The Data Elements dialog interface allows the developer to view all of the data associated with the currently open MFA. It also allows modifications and inclusions of certain elements.

The dialog box can be opened by clicking

or from View on the menu bar.

Samples that were imported through the Sound Object appear here. You can preview them with the Play button, Replace all instances of this sound with another sound file or Extract them out of the MFA file.

This interface cannot directly delete sounds from your MFA. Sounds that are no longer tied to any event will be removed after closing and re-opening the file.

There are other options for individual sound samples:

This tab is visually similar to Sounds, which again is associated with the Sound Object. The only exception is that there are no options. Don’t forget the term “music” refers to MIDI, which is a sequencer format, not an audio stream.

This tab allows you to add and remove binary data for inclusion in your application. See Binary Data for information on this feature.

This tab lists all of the external files in use by your application. You cannot directly remove any files listed here, instead you’d need to delete the action that selects an external file.

Applies to the Windows Runtime only.

This tab lists all of the extensions currently in use by your application. This excludes common Clickteam objects such as Counter and String. You can also retrieve the file name of the extensions themselves. For instance the Rich Edit Object is kcriched.mfx.