The Frame Editor allows you to place all the objects of a frame of your application nicely, and create your display visually.

The Frame editor consists of 2 panes. 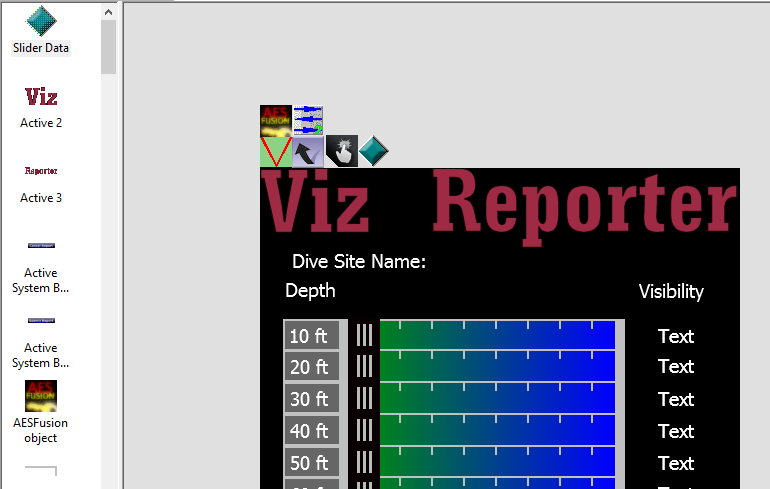 This is the Object List window. It lists all the objects used in the frame.

Allows you to edit, the content of your frame. Your frame is displayed in the middle of the edit area, and is surrounded by a gray area. The gray area is off screen, you can use it to hide objects. You can change the size of the off screen area in the preferences of the Frame Editor (Horizontal and Vertical Margins).

Usually the size of the frame including the gray, invisible area, is greater than the size of the editor’s window. To access the hidden areas, just use the scrollbars, or press the SPACE key while moving the frame with the left mouse button.

How to insert new objects

To insert a new object, either choose the menu option “Insert / New Object” in the menu bar, or right click in the editor and choose the option “Insert object” from the popup menu. You will be presented with the object selector box, pick one object and then click into the frame at the position you want to put it.

You can drag & drop objects from:

When you drag an object between 2 different frames, by default the object is duplicated in the destination frame. If you press SHIFT while releasing the mouse button, then the object is moved, i.e. it is deleted from the source frame.

If you use the right mouse button to drag & drop an object, when you release the mouse button you are presented with a popup menu, in which you can choose:

To select an object, simply click on it. The number displayed in the top-left corner of the selection box is the number of its layer, followed by the number of the object in the list of objects of this layer.

To select several objects, either draw a selection box around the objects to select or press SHIFT while clicking objects to add or remove them from the selection.

To move objects, just select them and drag them. You can also manually change their position in the Size & Position tab in the Properties, and/or use the various alignment commands in the menu.