Multimedia Fusion 2, or as commonly referred to as MMF2 is a visual programming tool by Clickteam to allow the creation of applications and games. It is the successor to Multimedia Fusion 1.5 but is now preceded by Clickteam Fusion 2.5. There are 3 editions of the software, each sharing the same interface, but offer different features, additional exporters, and runtime agreements.

As an addition to these editions, there was also a Newgrounds Edition and a demo version.

This is the ultimate, royalty free, creditability free edition of the program. It allows the use of developer only extensions, as well as no need to credit Clickteam, use a Fusion logo or state that it was created with Fusion. Users who purchased this product see the dark blue logo.

This still features the same interface from the Developer edition, but is much more affordable and doesn’t work with Developer only extensions and requires the user to credit Clickteam with a “Made with Fusion Logo” somewhere in their product. Users who purchase this product will see a light cyan logo.

See the The Games Factory 2 page for the stripped, budget version of Multimedia Fusion 2 and the free Newgrounds Edition. 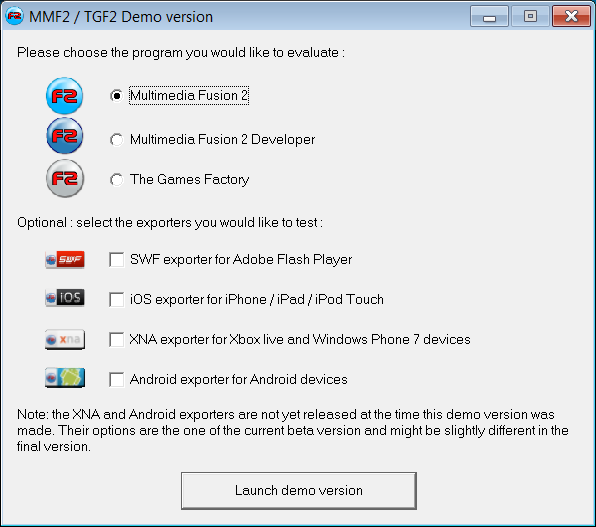 Dialog box that appears when the demo starts.

This was originally available to download from Clickteam’s website to test the software. It was very limited in functionality featuring 30 days before expiring, no extensions and could not export creations. Towards the end of Multimedia Fusion’s lifespan, the trial had been updated to give potential users a test drive for all 3 products, including exporters. This did not change the fact a trial user cannot export creations, and can not save MFA files after 30 days. Users can open a specific product (Example: Multimedia Fusion 2 Developer) directly or open the Demo app to select exporters.

The editor is split up into various interfaces, used in order to modify different aspects of applications or games.

An exporter enables a user to build an application or game to a different platform. These can be optionally purchased and allow developing for more platforms. Extensions may be incompatible and/or behave differently with exporters due to code differences, so it is essential to check the compatibility between them first.

There are no longer updates to this product, but it is still supported.